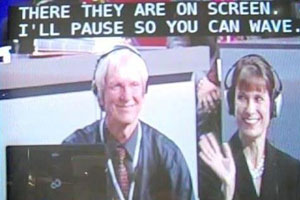 Jack Boenau is the president and owner of AmeriCaption, Inc., which he established in 1990.  Jack has worked in court reporting and convention reporting since 1969 and was a pioneer in providing CART and closed captioning services since the late 1980s.  Jack was chair of the NCRA CART task force 1996-1997, and during his tenure as chair, the acronym CART was redefined to mean Communication Access Real-time Translation.

Deanna "Dee" Boenau is the vice president of AmeriCaption and began her career in 1992.  Dee has tested her stenographic skills throughout her career by competing nationally and internationally.  Dee competed in three Intersteno world competitions in Cagliari, Italy in 2019 and placed first in the Audio Transcription Competition, second in the Speech Capturing Competition, and third in the Real-time Speech Capturing Competition.  She placed 2nd in the 2011 World Competition held in Paris.  Dee placed 2nd in the National Speed Contest and 2nd in the National Real-time Contest in 2013 and won the National Real-time Contest in 2010, 2016, and 2017 and has medaled overall in national competitions 33 times.  Dee is also the featured captioner in "For the Record: A Court Reporting Documentary."

Dee was the first closed captioner for the nationally syndicated program “Daytime” from 2006 through December 31, 2014.  As a result of corporate mergers, Riverbank Studios and WFLA were forced to use a different closed captioning company beginning January 1, 2015, because of an existing closed-captioning contract with the new parent company.

Get to know more about Dee and Jack: